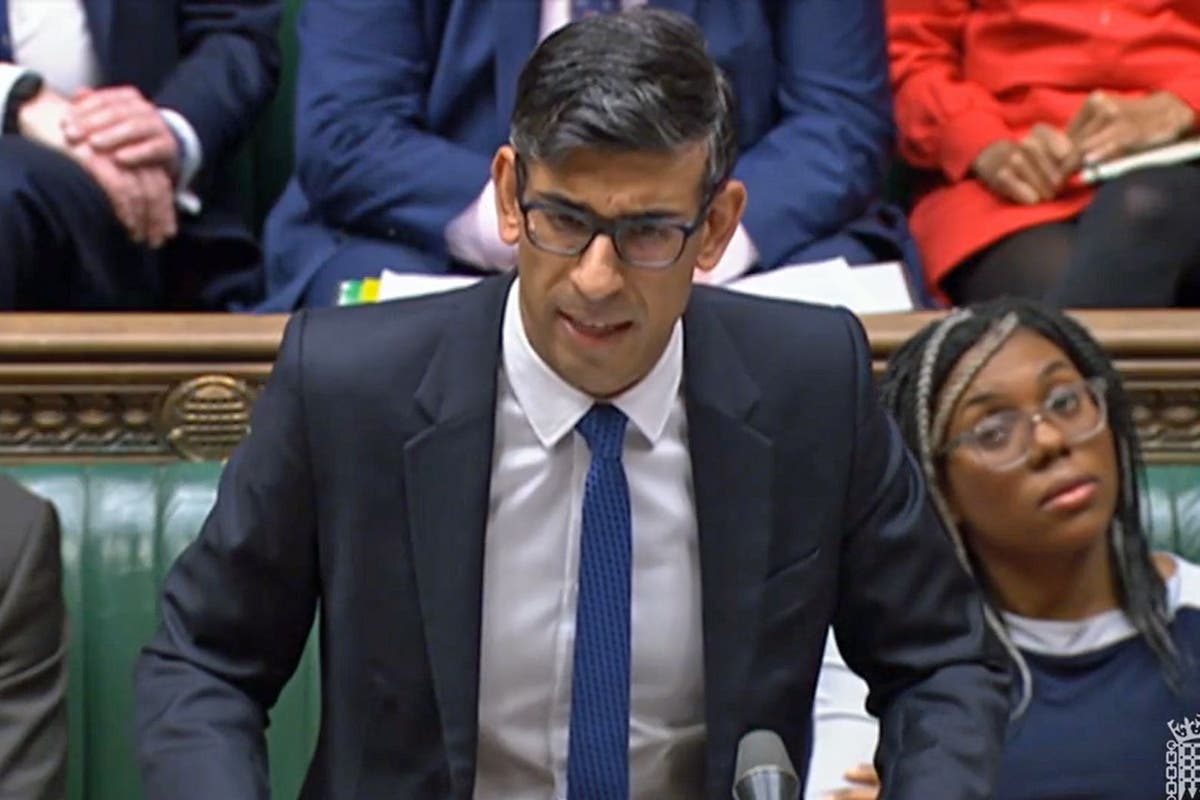 ishi Sunak has suggested it would have been “politically expedient” to sack Nadhim Zahawi but insisted that “due process” means the investigation into his tax affairs should be allowed to reach its conclusion.

The Prime Minister acknowledged that he had not been given the full picture about the Tory chairman’s financial matters when he told MPs last week that Mr Zahawi had given a “full” account.

But he insisted on Wednesday that when he entered No 10 and gave Mr Zahawi the job of Minister Without Portfolio “no issues were raised with me”.

Downing Street was unable to say whether Mr. Sunak fears further damaging surprises about Mr. Zahawi’s tax affairs will emerge and refused to rule out the Prime Minister ever having paid a tax penalty.

At Prime Minister’s Questions, Mr. Sunak was challenged over Mr. Zahawi’s tax affairs for the second week running by Labor leader Sir Keir Starmer, who claimed he is too “weak” to sack his embattled party chairman.

Mr. Sunak said: “Of course, the politically expedient thing to do would be for me to have said that this matter must be resolved by Wednesday at noon.

“But I believe in proper due process.”

Mr Sunak has ordered an investigation by Sir Laurie Magnus, his independent adviser on ministers’ interests, into whether Mr Zahawi broke ministerial rules over the estimated £4.8 million bill he settled with HM Revenue & Customs (HMRC) while he was chancellor.

Since I commented on this matter last week, more information, including a statement from the Minister Without Portfolio, has entered the public domain, which is why it’s right that we do establish the facts

A week ago, Mr Sunak told MPs that Mr Zahawi had “already addressed the matter in full” – but Downing Street subsequently revealed the Prime Minister had not been aware that the Conservative Party chairman had paid a penalty to HMRC as part of the settlement.

Mr. Sunak said: “Since I commented on this matter last week, more information, including a statement from the Minister Without Portfolio, has entered the public domain, which is why it’s right that we do establish the facts.”

Sir Keir made a veiled reference to Mr Sunak’s billionaire wife, Akshata Murty, who has held non-domiciled status, as he suggested the job in No 10 is “too big” for Mr Sunak.

The Labor leader said: “We all know why the Prime Minister was reluctant to ask his party chair questions about family finances and tax avoidance.

“But his failure to sack him when the whole country can see what’s going on shows how hopelessly weak he is – a Prime Minister overseeing chaos, overwhelmed at every turn.”

Sir Keir added: “I think anybody watching would think it’s fairly obvious that someone who seeks to avoid tax can’t also be in charge of tax.” Yet for some reason the Prime Minister can’t bring himself to say that or even acknowledge the question.”

The row prompted further questions about Mr. Sunak’s own financial affairs, with his press secretary refusing to say whether Mr. Sunak has also paid a penalty to HMRC as he prepares to publish his tax returns in a transparency attempt.

“You wouldn’t expect me to get into the Prime Minister’s tax affairs, they are confidential,” she said in remarks reminiscent of a position she once gave to inquiries about private healthcare before Mr. Sunak admitted having used it in the past.

She was unable to rule out any more damaging revelations about Mr. Zahawi emerging, in a sign of the levels of trust.

“I don’t think any of us can predict what may come up,” she said.

But the Prime Minister’s official spokesman did not give the same assurance, pointing to the ministerial code recently being updated to indicate “it’s no longer a binary decision”.

Mr Zahawi turned up for work at Conservative Campaign Headquarters (CCHQ) on Wednesday but did not show himself at PMQs.

Lord Hayward told Sky News: “I think he should be considering whether he stands aside for the period of the inquiry.”

The Tory MP said that now Mr. Sunak has asked Sir Laurie to examine the case, “it makes absolute sense for the ethics adviser to report” before any further action is taken.

“These are tax matters – nobody knows the full picture of that, by the way, except Nadhim Zahawi and of course HMRC – so let’s allow that report to land and then we have to take things from there,” he told the BBC.

The row centers on a tax bill over the sale of shares in YouGov, the polling firm Mr Zahawi founded, worth an estimated £27 million which were held by Balshore Investments, a company registered offshore in Gibraltar linked to Mr Zahawi’s family.

Mr Zahawi said HMRC concluded there had been a “careless and not deliberate” error in the way the founders’ shares, which he had allocated to his father, had been treated.

Downing Street subsequently revealed that it did not know last week that Mr. Zahawi had paid a reported 30% penalty to HMRC.

Mr Zahawi has insisted he is “confident” he has “acted properly throughout”.